The year 410 began a series of events which would bring forth the Golden Age of the Jews in Spain. It was during this year that Germanic tribes, called the Goths, sacked Rome. Under Gothic rule, Catholics residing on the Iberian peninsula were not well-favored since they were an unpleasant reminder of the Romans. The Jews on the contrary, being so dissimilar from the Catholics, were allowed to live in peace. However, in the year 587, the Goths converted to Catholicism and the Jews once again underwent persecution.

A similar cycle of history would repeat itself with the Muslim conquest of the Iberian Peninsula in 711. Suffering under the Catholics, the Jews assisted the Muslims as they overthrew the Catholics. Under the Muslims, the Golden Age of the Jews in Spain finally began.

Jews from many places began to relocate to Iberia at this point in time. Drawn by the peaceful environment, Jews from Europe began to migrate to the region. This was not the only attracting factor, however. Naturally, the Muslims had brought their language, Arabic, with them. Having already spoken Arabic in the countries of northern Africa and the Middle East, Jews from Morocco to Babylon began to make their way to Iberia as well. 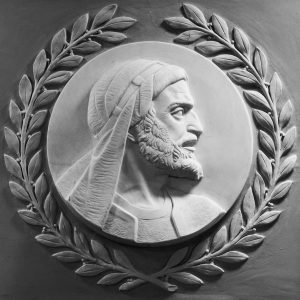 Bas relief of Maiamondes in the U.S. House of Representatives chamber.

The Golden Age of the Jews in Spain ultimately reached its zenith under the reign of Abd al-Rahman III (882-955) in Cordoba. Jews enjoyed not only religious freedom, but also were free to prosper both culturally and economically. During this time, Jewish scholars and professionals thrived in the fields of philosophy, mathematics, astronomy, poetry, science, botany, geography, medicine, and more. Less commonly known, is the fact that even the Torah scholars, rabbis, and Jewish theologians in Spain wrote in Arabic. Some of the most famous ones were Maimonides, Avraham ibn Ezra, and Moses ben Enoch.

Spain retained its status as the center of world Jewry until the 11th and 12th centuries, when new Muslim rulers began to limit and persecute the Jews once again. This persecution only intensified when the Catholics began to regain control of the Iberian peninsula, and the crusades began. It was time for the Jews to move on, and they began seeking refuge in other parts of Europe.